‘Time of my life’ in Thimarafushi 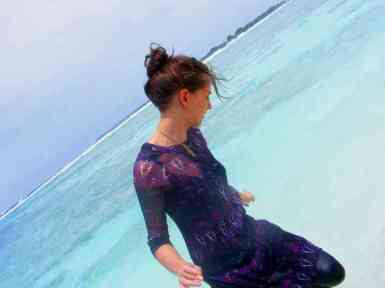 Always up for a challenge, Lucy Lovell jumped on the offer of a two-month volunteer teaching post in the Maldives without hesitation.

Perhaps I was drawn by the romantic images that many will associate with this country; water villas on the beach, cocktails in the sunset, sunbathing on the pearly beaches. But what I have discovered through teaching is a side of the Maldives even more inspiring and unique, and whilst it was completely different from any of my expectations, exceeded them in every way.

My flight to Male’ was long and arduous, but when I finally landed, the turquoise sea and busy ferries instantly refreshed me. Before leaving for my local island I stayed a few nights with my Mum who lives in the capital Male’. The capital is one of those few cities which manage to overwhelm every one of your senses; the tall, rickety buildings look like a half played game of Jenga, the whizzing scooters beep, swerve and roar past either side of you, the smells quickly appear and dissolve as you walk through clouds of heady spices, old garbage, pungent fish and salt rising from the sea. It’s a stark contrast to my next destination: the peaceful local island of Thimarafushi, which is where I take the speed launch the following morning.

Before I left Male’, I was reassured that the speedboat to Thimarafushi was only a three-hour one. After five long hours of smashing against waves and rolling over the sea, the boat pulled alongside other brightly painted vessels in the small harbor. Some locals gathered to welcome back family members who have also travelled from Male’, and seem confused as to why I was getting off as well. Whilst I try to regain the use of my legs and stifle the queasy sea-sickness rising inside me, I am introduced to various members of the community and taken to my new home for the next two months.

The island is a small one, as I found out later as I perused the streets. The sandy paths run in geometric grids, and at either side lie rows of sun bleached houses and walls behind which grow vast palm trees. Each house is no more than one story high, and the facades are painted gloriously with emerald greens, turquoise, deep purple; all wonderfully aged with peeling paint which reveals yet another layer of magenta or bright yellow. The up sea laps against what are undoubtedly stunning sandy beaches, however, they are unfortunately covered in rubbish, which the locals have no qualms about throwing straight into the sparkling water. Incidentally, this issue is a recurring one and I find later that my class is left in a similar state at the end of each lesson.

Teaching on the island has been an incredible experience. For young people here, there are not many options. The route which many take after gaining good results from school is to go on to further study in either Male, Sri Lanka or India, after which they can easily find a good job. But what about those who did not achieve the top grades? There are no vocational courses on the island, and due to a lack of jobs unemployment is high. The course I teach is a vocational training in computer administration and bookkeeping, it offers a new route to those who did not do well at school, or who missed out on going away for higher education due responsibilities such as children or marriage. The range of students in my class was a daunting aspect for me; aging from 16 to 29 and varying levels of spoken English. Many of the students that I teach have never left the island, and they are used to the ‘island’ way of life, which entails no stress, no urgency and no worries. Perfect for some, but proved to be a difficulty when trying to keep them regularly, and on time to my classes! 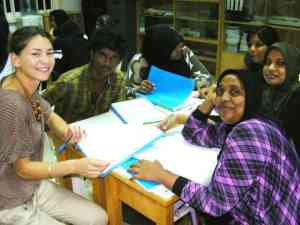 I had prepared myself for the worst when it came to my classroom, but surprisingly, it was well equip with everything I could ask for. The smart board was a welcome surprise and made teaching the computer modules much easier. My class size was expected to be 30, but when I arrived I was asked if I would take 41, I did agree and I don’t regret it; the students have all been great and I wouldn’t have wanted any of them to miss out. It was a challenge to teach such a broad range of students, but with their co-operation and respect we have managed to work quickly through the syllabus without trouble. I enjoyed using alternative teaching methods to help them learn, something they were not entirely used to, and no doubt thought I was a bit strange when I used techniques like scriptwriting and poster-making.

I was staying in a room in a hotel, and therefore took all my meals in a local café. This was a quaint and friendly place, and one of the waitresses, Shahu was in fact a student in my class. I would always look forward to see what tasty meal was going to be set before me; fresh fish and roshi, lentil curry and rice.  I am now also totally addicted to the traditional Maldivian breakfast of mas-huni roshi (tuna mixed with coconut, lime, onion and fresh chili, with a type of flat bread to eat it with). When Ramadan, the month of fasting came, the café closed during the day.

During this time all the locals refrain from eating or drinking from 6am until 6pm, and I had resigned myself to follow suit. Surprisingly, the welcoming owners invited me to dine in their home, and insisted that I still took my breakfast and lunch even though they were all fasting. Although I declined at first, feeling incredibly rude to eat in front of them while they were hungry, I received numerous phone calls from Shahu insisting that I came to eat. What I found wonderful about Maldivian homes is how close the families are. After marrying, the wife moves into the husband’s home, usually inhabited by his mother, father, siblings and their children all under one roof.

What a strong bond they all seemed to share with one another, the large family forming a support for the grandparents who still run the house. In this culture age equates to respect, and the elderly still order around their grandchildren, teaching cooking, the family business and passing down traditions. I will miss my afternoons spent with Shahu’s family, playing football with her son and watching her mum skillfully cook the most wonderful and intricate food. 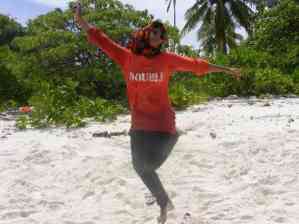 My accidental discovery of the game traditional Maldivian sport Bashi was also a highlight for me. Whilst wandering towards the sea one afternoon I came upon a group of women on a tennis court. They invited me over, and explained that they were playing Bashi.  It involves two teams, one who take turns to whack the tennis ball, and the other who stand in rows and try to catch it. They gather every day at 5pm to play, giving women a chance to socialize and escape the house for a few hours. The sun sets behind them they play, and their young children dressed in colourful dresses run back and forth collecting stray tennis balls.

I am struck by the real sense of tradition in these women, and they are proud to tell me about the heritage of this ancient sport; how it is only played by women, and can only be found in the Maldives. From this, the women seem to have a forged a strong bond, and the same two teams will play each other every night. Afterwards they will often go to the local café to laugh and chat over a Jugo milkshake, before returning home to cook dinner for their families. 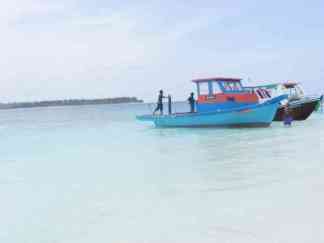 The surrounding islands also held their own unique characteristics. The first month the students organised a picnic trip to the nearby island Kanimendhoo. Many locals and tourists alike take trips to this island to picnic on the beach or take advantage of the surfing. We hired a boat and took the 15 minute journey across the pristine ocean to arrive at the island. There was no jetty, so we had to precariously jump off the side into the clear warm water. There are a small group of farmers who live here live peacefully, growing watermelon, sugar cane and coconuts. They look after the island and its visitors, and gave us a cup of hot coffee and some sugar cane to chew on after we had been swimming.

The beach on this island was just breathtaking; perfect white sand lined with palm trees and a glistening cobalt blue ocean. This island had something that even the top resorts are missing: culture, character, and a genuine warm welcome. On the return boat journey we are even lucky enough to have a pod of dolphins join us on the way home.

A short way off the coast of Thimarafushi lies another island, Hiriyanfushi. This was accessible by foot, and after walking along the beach for 5 minutes you only had to wade through knee deep blue sea to step foot onto another uninhabited island. Once again it was some of my wonderful students who organized this picnic for me, and when we arrived we were welcomed by the owner of the island.  He made us welcome and skillfully climbed a palm tree to bring us down some fresh coconuts to eat. We spent the day lying in the clear, warm ocean playing games, chatting and collecting shells until it was time to walk back home. Another island worth a visit is the inhabited island of Veymandoo. It took only a 30 minute boat ride from Thimarafushi, and boasts a bigger range of shops which meant people were often travelling back and forth. Certainly, the 20 Rufiyaa trip was worth it just for the home comfort of chocolate, which could not be found on my island.

My teaching course is not yet over. With a month left for me and yet two months left of the course I can only hope that at the end of it the students will have a qualification to be proud of. From what I have seen they have been progressing more every day, and their attitudes continue to inspire me. For some, this course offers full time mums a chance to get the education they missed out on, for others this is the first step out of school or unemployment, either way, every student will take something different from it, and will have achieved their own personal goal. On completion of the course some students may continue learning elsewhere and others will stay and find a job on the island, either way I feel proud and honored to have been able to help them on their way.

This tiny local island has given me a more valuable and priceless experience than the most expensive resort. I have been lucky enough to meet truly wonderful people who I shall always keep in contact with, and experienced hospitality and warmth beyond anything I expected.