Surfing on a budget 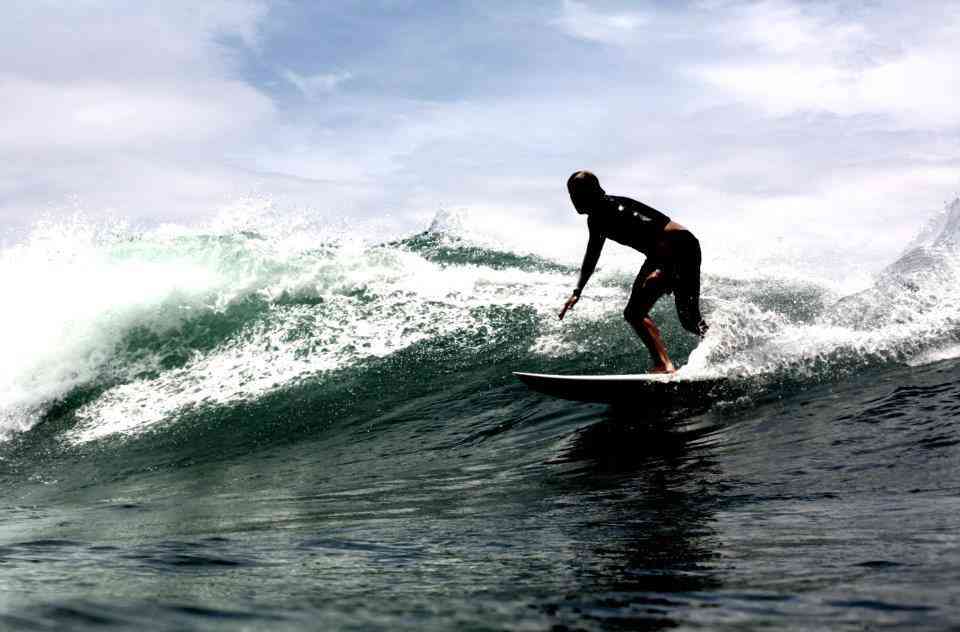 There has never been a better time to grab your surfboard and go to the Maldives. Although often associated with high-end resorts, there is a thriving indie-market emerging in the islands, which won’t cost you an arm and a leg writes Donna Richardson.

Specialist surf companies such as Surf in Maldives or Maldives surf tours can help arrange your trip, or you can just turn up as a backpacker and get involved in the local surf scene. Here is a handy guide on how to get started.

A popular surf point can be found in the heart of the capital city Male’ along with a vibrant local surf scene. It’s called ‘Towns’ and its very ‘peaky’ and powerful. This  reef break has two main sections, the “2nd Reef” (right) & “Padang” (left). Towns is where most of the local surfers surf so its a great way to experience native culture, usually when everyone gets off work around 4.30pm. 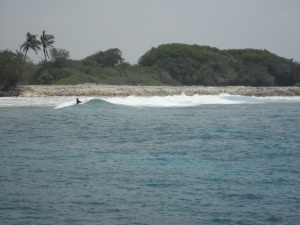 Surfers in the know will charter a safari boat and head to Himmafushi  where a collection of surf breaks can be found (Sultans, Honkeys and Jails). Sultans is a fast (right hander) wave creating two sections, the first peak mellow leading to the second. Both are perfect barrels giving a ride of around 200 metres. Although usually crowded, it’s quite deep and this makes it more of a competitive surf, rather than a beginners wave.  Honkeys is a ‘goofle’ or left. The first peak is mellow, the second peak attaining a height almost double the first giving a long perfect ride. Meanwhile Jails, named after the prison facing the surf is a right hand reef break breaking over coral. This is the fastest wave in the Maldives with long walls and three tube sections which are hollow and barrelling. A lively local crowd can be found here along with many pro surfers.

A special surf camp called Coke’s can be found within two hours travelling distance from Male’, just off the island of Thulusdhoo. Named after the Coca-Cola factory on the island, this is a big wave tube spot. It has a steep barreling takeoff and a very shallow inside section that opens up even more than the takeoff. Best on the mid to high tide it can be surfed at low tide if the swell is big enough. Access to the surf spot is a short ten minute paddle or a dinghi ride away (which can be hired) You can stay at the surf camps from between 50US$ and 65$US.

An advantage is there is a nearby spot called ‘Chickens’  just 10 mins away, considered the best left hander in the Male ‘ atoll. Chickens has very fast sections and can get hollow on  a south swell.  Friday is local day but they are super friendly and it’s an amazing ride, seldom crowded. To get to the spot you can hire a dinghy which will cost 25US$ for two hours or its around a 20 minute paddle from the island to the surf. If you are an avid surfer it’s a world class wave and very consistent.

Safari boats will take groups out on pre-arranged tours or you could get in touch with an independent surf organiser to organise you a transfer. Saturday Surf Dhoni is a facebook forum set up for surfers to meet fellow surfers.  An expat/locally run partnership which was set up to allow expats/locals and day trippers to escape the sprawling metropolis of Male’. The great thing is it’s cheap as you just split the cost with the group. It saves you the hassle of organising your own trip since all the logistics are arranged for you.

If you want to go and catch some waves mid-week there is a little known ferry which leaves from Male’ to Himmafushi at 2pm every day except Fridays. It costs a mere 35rf. However, coming back is a bit tricky. You will have to stay overnight and then return on a ferry which runs every two days up until 10pm at night. It takes an hour to reach and sometimes is very rough. In Himmafushi, you can find accomodation for around 250rf local rate or $25-35$US and you will have to get food from local restaurants.

Once you find your feet in the Maldives it may be worth hiring a surf safari boat to venture further afield. One of the cheapest boats Sea Coral costs 490$ (approx). It’s basic and includes a surf guide. What is more you have alcohol onboard – a bonus in this Muslim country which prohibits drinking  on local islands. The vessel has three rooms, two separate toilets/showers plus snorkeling and fishing gear. A bonus is you can travel from North Male’ to Meemu atoll (which is also a good option and a bit farther afield from crowded breaks like Jails).

In South Male’ the waves are smaller and less crowded and the snorkeling is excellent. Ask them to take you to an island called Guraidhoo which is three hours south from Male’ (in South Male’ atoll). It has a similar surf camp to Coke’s, but a wave which is easier to learn called Riptides (right hander). For this it’s best to charter a boat with friends. If you don’t have a prearranged trip, all the expats hang out at Hulhule’ Hotel (HiH as it is affectionately called) and welcome any change to routine.

Travelling farther south, you can go to Vaavu atoll which has excellent snorkelling and fishing spots, not to mention some of the best snorkelling in the Maldives). You can also venture to Meemu atoll (the farthest point you can go on the package) which has a surf break called Muli. This is a great place to learn to surf  and this point  is hardly never crowded. Although it is far from the beaten track – perhaps a full day’s travel. Why not combine it with island hopping on one of the least populated islands.