Russians: “top five” of all nationalities who holiday in the Maldives 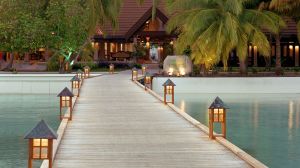 With  gorgeous beaches, year-round sunshine and five star luxury resorts, the Maldives has always been a haven for Russian celebrities, and billionaires. But now ordinary Russians can have a slice of paradise as Russia is officially represented in a poll of the top five nationalities who frequent the Indian Ocean Islands the most.

Officially Russia ranks fourth to China, Germany and the United Kingdom, with Italy coming in fifth place in the country’s top  five visitor numbers for 2012, according to the Maldives Tourism board. Last year, 62,782 Russians holidayed in Maldives resorts. The islands are seen as the “true dream destination” of wealthy Russians, not least because its five star luxury islands which hold the ultimate ‘brag value’ to their friends, according to the General Manager of the Maldives’ most established resort Kurumba, Jason Kruse.

Kurumba has confirmed that Russians make up at least 20% of their guest arrivals. It’s hardly surprising with direct charter flights, lasting approximately eight hours, by Aeroflot and Transaero operating seasonally. There are also scheduled operators such as Emirates, Sri Lankan Airlines and Qatar airways connecting Russia to the Maldives via the United Arab Emirates, Singapore and Sri Lanka.

But what are this key market’s preferences and how do their tastes compare to other nationalities that frequent the Maldives? Mr Kruse said:  “Russia is a strong market for the Maldives and it is a very important segment. Spa, sun loungers, game fishing and lots of restaurant choices are key requirements for the Russian market.

“Warm weather, spas, magical beaches, great food and cold drinks, the Maldives has everything which Russians could wish for in a destination,” he added.

Furthermore, he observed that the Russian market has evolved over time from being mainly couple-oriented and made up of group bookings to become more “family orientated”.  Meal preferences for Russians are more conservative with classic grills. Privacy is not a major issue and unlike their Chinese counterparts, they will spend lots of time on the beach tanning and taking advantage of the water sports on offer.