Afternoon tea on an RAF resort south of the Equator

Equator Village resort is quintessentially English with its wicker furniture, billiard table and relics from its former life as an operational Royal Air Force base.. .And then you glance out the window and see the blue, blue lagoon, surreal as it seems.

This oasis is a few nautical miles off the equator – it’s called Gan in the Maldives and it used to be the former RAF staging post during the Second World War and up until the late seventies. 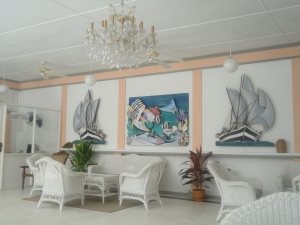 From the free range chickens running around the chalets onto the beach to the daily afternoon tea, it’s these finer details and nod to its former colonial past, coupled with its exotic location make this place work on many levels. Despite its English feel, the main tourism trade is predominantly German, closely followed by the Russians and Brits and the resort attracts repeat bookings year on year.

From the moment you check in, your every need is catered for by the two friendly receptionists called Fathun and Shama. Betweeen them they expertly field your requests from morning to night with a shy nod and a beautiful smile. Meanwhile the jovial and bilingual Sri Lankan bar and waiting staff also help to enrich the experience of staying in the resort.

The resort also serves up an excellent English fried breakfast, yet aside from this there are in fact many legacies left by the Brits’ including species of tree and quaint rose-gardens in the well groomed grounds. The soil here is more fertile than anywhere else on the archipelago and the lemons are big, juicy and hang off the trees like watermelons wherever you look.

The décor has remained virtually unchanged since its service days. From walking into the elegantly columned open reception, you step into a world where officers and airmen and women once dined and entertained. Relaxing on the wicker chaise longues, you are welcomed with a lemon tea and then guided into the dining hall which was converted from the original mess hall, past a small library full of German and English novels 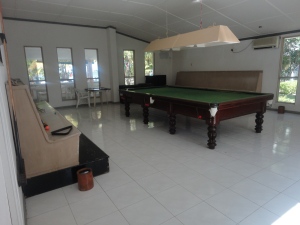 Meanwhile, the bar to the left has a all inclusive menu and a non-inclusive menu with most spirits and wine and beer free to those paying for all-inclusive. A weekly disco gets the revolving round wooden dance floor and strobe lights going in parties which would make the former station proud. Meanwhile in the anteroom an antique dark oak billiard table and a dart board and marker hail back to the Second World War era.

Fanning out ceremoniously from elegant columned reception are a hundred-odd independent beach huts, which are in fact the former sergeants’ sleeping quarters – from the RAF blue doors of the beach hut bedrooms to the glorious Laura Ashely style paisley furnishings, these have all the hallmarks of barrack accommodation in somewhat tropical climes.

While many of the fixtures and fittings have been painted a very un-RAF pink in the reception, the accommodation rooms remain the same as when the Brits were here with its wicker dressers and chairs that transport you back to rural England of times long gone by.
A growing military tourism of ex-retired servicemen is evolving here. Last March saw the return of around 50-odd retired airmen after almost 40 years. There are still a few characters who return year on year to experience the nostalgia and a new wave of culture vultures keen to explore the past life of this charming resort are now being encouraged to share with them the magic of this unique place.

Although it is well-established this three star resort has certain charms hard pressed to be found anywhere else on the atoll, and it will be joined by another resort later this year also aiming to capitalise on the service history – The Gan Island Club which was the former Officers’ Mess. In the wider grounds outside the resort much culture and nods towards its history can be found, Just turn down the path to the left of the resort gate in the direction of the airport and many relics to the airbase remain. A good starting point is the RAF Gan memorial which pays tribute to the men and women who died while serving in the Maldives (it is worth noting that no one died in combat or active service). There is also a memorial to the Indian Army and its various regiments who were stationed here during the same period. 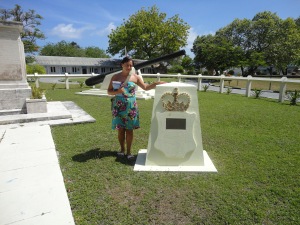 Sadly many former buildings were bulldozed to make way for Guyoom’s ‘industrial revolution’ but the Astra cinema remains which now shows Bangladeshi films for the community as well as the Gan Post Office which serves the Addu Atoll.

Meanwhile, to this date the RAF Gan workshop is still in operation, albeit nowadays as a maintenance and service department for the resort and airport transportation network. Many of the tools which were once used by the Indian and British personnel are still used by the teams servicing the resort’s vehicle fleet.

The road now ends, or begins (depending on which way you look at it) at Gan International Airport, once the same airfield used by the RAF. Currently the airport receives charter flights, although with the launch of Hong Kong flights and planned expansion of Gan International Airport. Additionally there are plans to receive more international flights later this year once the development and expansion of the runway gets under way.

Because of its intimacy, Passengers flying by charter to most international airports can bypass the queues and stressful experience altogether with a walk along the beautiful unspoilt beach nearby where herons perch peacefully by the shore.

A nearby airport café is a bustling hub for the airport staff, aircrew and pilots. For less than 30 ruffiya you can enjoy steak submarine and fresh apple juice – saving at least $20 on the same meal in the resort as a non-inclusive guest. 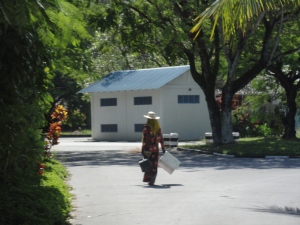 Walking back to the resort through marvel at the tree lined path where one can see the efforts of local women dressed in a curious mix of hijab and English country hats sweeping the leaves from the ground with home-made wicker brooms.

After an afternoon exploring, why not head back for happy hour at the bar. The sunny beach in this little Oasis just a few kilometres away from the equator is one of the few things which is definitely not reminiscent of rainy old Blighty. Why not enjoy a cocktail by the brilliant blue lagoon in the afternoon light as the palm trees sway and boats dock in.

Famed for its excellent house reef, the waters host some of the best snorkelling and diving in the Maldives with its most spectacular marine life and hard and soft corals which mainly escaped the El Nino coral bleaching phenomenon.

For divers, a novel way to seek adventure is wreck diving. Although the Maldives has never seen direct combat, the British Loyalty vessel was sunk during a torpedo attack just after the Second World War. This remains one of the most challenging and interesting dives in the country.

Another legacy is the sporting facilities. The resort also has magnificent tennis court and facilities inherited from the Brits. The resort is also one of a kind in that it uniquely hires out bicycles to guests who want to enjoy the wider delights that the 13 km atoll has to offer in the nearby Maldivian villages of Maradhoo and Hithadhoo, which can be reached by the Gan causeway also built by the British. 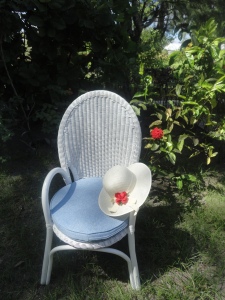 Occasionally, some of your visitors may see an advertisement here.

Tell me more | Dismiss this message